Back
Home > The Association

Founded on May 27, 2016 in Geneva, the Swiss Arts Crafts Association aims to federate and coordinate the action of the Swiss cantons to preserve the craftsmanship in Switzerland, enhance and encourage the development of this craftsmanship when practiced by high-level professionals who master, evolve and transmit exceptional techniques and savoir-faire.

Its main tasks are to inventory arts crafts in Switzerland, coordinate Swiss participation in the European Artistic Craft Days, honour and reward craftspeople practicing in Switzerland distinguished for their excellence, transmission of savoir-faire by promoting apprenticeship and training in crafts, helping to preserve the knowledge and skills of crafts in danger of disappearing, valorise the contribution of crafts to the Swiss economy, to represent Switzerland in the international institutions active in the field of the promotion of arts crafts.

Its action spreads to all the linguistic communities and cultures of the country. The Federal Office of Culture supports the Association with its high patronage.

The logo of the Association is the result of a competition open to apprentices and students of the Higher Education and vocational schools training in graphic arts in the founding cantons. Mélanie Blanc, from Neuchâtel, student at the ecal, the Cantonal School of Art of Lausanne, won this competition.

"The logo expresses the variety of crafts and the national dimension of the Association. The visual is inspired by different crafts such as: decorative painting, mosaic, design or fabric work. The visual is based on the diversity of Switzerland and its 26 cantons. In the square, there is the Swiss cross as well as 26 pieces each representing a canton. The pieces intertwine to create the national dimension as well as the association of all arts crafts. The weft used on some pieces adds dynamics and material to the logo. This frame changes place in the pictogram according to the different languages. A visual game is created like a tangram or a puzzle. The weft and the pieces move to symbolize the richness in which the arts and crafts make up Switzerland and continues to compose and renew it, which is why the Swiss cross used in the pictogram is incomplete. It is continually being enriched by the diversity of the arts crafts.” Mélanie Blanc 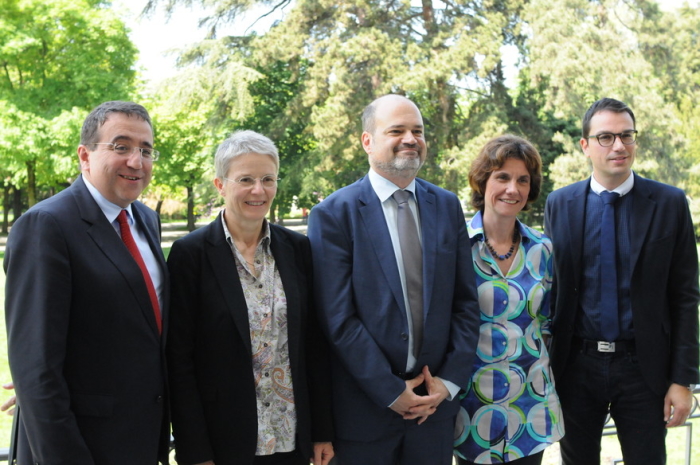